TEHRAN (defapress)- The fate of the world's 1.7 billion Muslims is no longer in the hands of the five permanent members of the UN Security Council, Turkish President Recep Tayyip Erdogan said on Thursday.
News ID: 79622 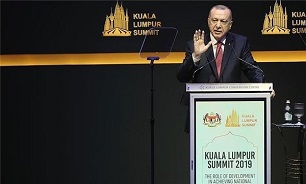 Speaking at the opening ceremony of the Kuala Lumpur Summit in the Malaysian capital, Erdogan reiterated that the world is bigger than five, referring to the five permanent UN Security Council members, whose veto power could prove catastrophic for smaller nations, Anadolu news agency reproted.

"The world is bigger than five" is a famous slogan repeatedly used by Erdogan to criticize the permanent council members --- China, France, Russia, the UK and the US.

“It is a must to update platforms bringing Islamic countries together, such as the Organization of Islamic Cooperation, to increase its efficacy," Erdogan stated.

He went on to say, “Unfortunately, we [Muslim countries] are wasting our energy on internal disputes at a time when artificial intelligence, quantum computers, robotic technologies are discussed."

“I know that none of us, as leaders who shoulder the responsibility of hundreds of millions of Muslims, are satisfied with this picture," the Turkish leader added.

Erdogan underlined the importance of focusing on potential solutions rather than constantly dwelling on problems.

''We should focus on projects that will stimulate our potential and cancel each other's deficiencies," he advised.

Hundreds of government officials, businessmen, representatives of civil societies and experts from different sectors across the Muslim world are taking part in the summit.

Erdogan underscored that Turkey did not and would not give in to internal and external pressure to silence it, including through a coup attempt, economic terror and slander.

"As they try to silence Turkey, we insist on calling attention to Palestine, Gaza, the Rohingya, Libya, Somalia and Syria," he stressed.

Referring to Turkey’s fight against the terror groups YPG/PKK and Daesh (ISIL or ISIS), he stated, "In spite of efforts to legalize terrorism, we are fighting against all terror organizations without exception."

Under two separate deals with the US and Russia, Turkey paused the operation to allow the withdrawal of YPG/PKK terrorists from a planned Syrian safe zone.

In its more than 30-year terror campaign against Turkey, the PKK --- listed as a terrorist organization by Turkey, the US and the European Union --- has been responsible for the deaths of 40,000 people.

Turkey also recognized Daesh as a terrorist organization in 2013. Since then, the country has been attacked by Daesh terrorists numerous times, including 10 suicide bombings, seven bombings and four armed attacks which killed 315 people and injured hundreds.

In response, Turkey has launched military and police operations inside the country and abroad.