Sanctions era will come to an end, Rouhani promises nation

TEHRAN (defapress) – Iranian President Hassan Rouhani said the era of sanctions and pressure against the Iranian nation will come to an end as enemies have realized that their efforts have been futile.
News ID: 79723 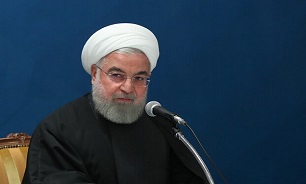 Rouhani made the remarks while visiting an exhibition of petrochemical industry achievements on Monday at a ceremony marking the national Petrochemical Industry Day.

“Here I will say frankly that the era of sanctions and pressure on the Iranian people will come to an end because our enemies have realized that they cannot force us into surrender with their ‘maximum pressure’ campaign,” the president said.

He went on to add, “their sole objective was to force us to sit at a negotiating table where we had no other choice but to accept all of their terms. This is impossible for our Islamic Iran.”

Rouhani then addressed domestic criticism at his government’s failure to live up to a number of its promises, saying “we made those promises during a period of peace, but then we were forced into a war that we didn’t choose and we didn’t start.”

“They started a full-out economic war against us," he said, in reference to the US' sanctions on Iran. "They wanted to make it a political war by trying to rally the whole world against us, but they failed at that. They also wanted to make it a 'legal war', by pressuring the United Nations and other international organizations to condemn us; they failed at that, too,” Rouhani said.