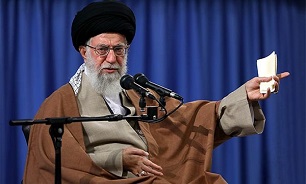 "You witness what they (the Americans) are doing in Iraq and Syria. They are taking ISIL's revenge from Hashd al-Shaabi. They are taking revenge because Hashd al-Shaabi paralyzed and kicked out the ISIL which had been created and nurtured by them (the Americans)," Ayatollah Khamenei said, addressing a large number of Iranian nurses in Tehran on Wednesday on the occasion of the Nurse Day in Iran.

"I and the Iranian government and nation strongly condemn the US devilish act," he underlined.

The US drones on Sunday bombarded a Hashd al-Shaabi base near the border with Syria in Iraq's Western province of Anbar, a Hashd Shaabi statement said.

The attack took place in the evening when the US drones bombarded the base of Hashd Shaabi's 45th Brigade near the border town of al-Qaim, the statement said.

The bombardment left tens of the brigade's members killed and wounded.

In reaction, Hashd al-Shaabi Lieutenant Commander Abu Mahdi al-Muhandis warned of a harsh response to the attack, saying that the blood of martyrs will not be wasted.

Also, Asa'eb al-Haq Movement, affiliated to the Iraqi popular forces of Hashd al-Shaabi, described the US deployment in Iraq as a threat to the country, calling on all political groups to react to Washington's "cowardly attack".

Meantime, Qassem Moslih, the commander of Hashd al-Shaabi in al-Anbar province, said that the US wanted to change the equations by bombing the popular forces' positions.

Also, resigned Iraqi Prime Minister Adel Abdul Mahdi in a message to the US secretary of defense underlined his opposition to the attack, waring that bombing Hashd al-Shaabi positions is a dangerous tension which threatens the security of Iraq and the region.

Meantime, Head of the National Wisdom Movement of Iraq Ammar al-Hakim condemned the attack, describing it as clear violation of Iraq's sovereignty.

Also, Falih al-Khazali, a member of al-Fatah coalition in the Iraqi parliament, warned that the US forces have started an obvious war against Iraq.

Meantime, Iraq's Hezbollah Brigades in a statement deplored the attack, terming it hostile aggression against the defenders of Iraq's borders.

Also, Iraqi President Barham Salih underlined that the attack was conducted against the two countries' agreements, describing it as unacceptable.

On Tuesday, thousands of Iraqis participated in the funeral ceremony of Hashd al-Shaabi martyrs killed in the US Sunday attack against their position, as they moved towards Washington's embassy in Baghdad.

The Arabic-language al-Mayadeen news channel reported on Tuesday that participants in the funeral ceremony declared a sit-in in areas near the US embassy and some of them erected tents in the area.

According to the report, a large number of Iraqi people, carrying the flags of Iraq and Hashd al-Shaabi, are moving towards the suspension bridge that leads to the US embassy from al-Janaderiyeh region.

They also carry placards to condemn the US aggression against Hashd al-Shaabi and Iraq's sovereignty, calling for the expulsion of the American ambassador.

The participants in the funeral ceremony also warned Iraqi legislators that if they do not approve a bill to expel the US forces, they will not allow them to enter the parliament anymore.