TEHRAN (defapress) – Venezuela expressed its firm condemnation of the incident and stated that it is "an action that clearly raises tensions in the region, without any basis in international law."
News ID: 79785 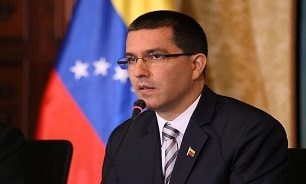 The Venezuelan government Friday condemned the military attack carried out by the United States' terrorist forces against Baghdad, Iraq, in which the Quds Force commander, the Iranian Major-General Qasem Soleimani was assassinated and called for respecting international law in order to preserve peace, according to Telesur.

In a statement issued by Foreign Minister Jorge Arreaza, Venezuela expressed its firm condemnation of the incident which occurred during this Friday morning.

"This is an action that clearly raises tensions in the region, without any basis in international law, directed directly against a military chief and a group of high-ranking officials of a sovereign country, in a conflict zone," the statement refers.

Venezuelan authorities conveyed their condolences and solidarity to the people to the governments of Iraq and Iran.

The Government also "called for respect for international law and for all actors involved to contribute to the preservation of peace in the Middle East."

The United States forces assassinated General Soleimani and Abu Mahdi al-Muhandis, the second-in-command of Iraq’s pro-government Popular Mobilization Units (PMU) — better known as Hashd al-Sha’abi — in an attack at Baghdad’s international airport early on Friday. The Pentagon said in a statement that US President Donald Trump had ordered the attack.