Millions of Iranians pay tribute to General Soleimani in Ahvaz

AHVAZ (defapress) – Millions of Iranians have poured into the streets of Ahvaz, holding massive funeral processions for the Iranian anti-terror commander, Lieutenant General Qasem Soleimani, who was martyred by US terrorists in Baghdad on Friday.
News ID: 79798 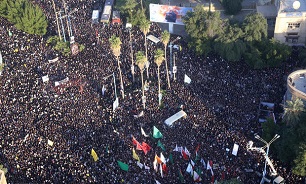 The bodies of the martyred commander and his companions have arrived in the southern Iranian city of Ahvaz, the main city in Iran's eight-year battle against the forces of the former Iraqi dictator Saddam Hussein, which was the scene of braveries of General Soleimani and thousands of other Iranians.

From Ahvaz, the cortege will be heading to the holy city of Mashhad in Iran’s northeast later in the day and from there to Tehran on Monday and finally to his hometown Kerman in the southeast for burial on Tuesday.

Iran's Supreme National Security Council said in a statement that a harsh vengeance "in due time and right place" awaits criminals behind Soleimani's assassination.