TEHRAN (defapress) – In a live TV address on Wednesday, Leader of the Islamic Republic Ayatollah Khamenei praised the role of martyr Lt. Gen. Qasem Soleimani in having foiled the US plots in the West Asian region.
News ID: 79838 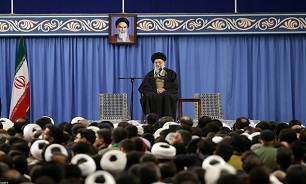 Ayatollah Khamenei is currently addressing the nation live on TV in a meeting with a large group of people from Qom, in commemoration of the 42nd anniversary of the January 9, 1978 uprising in Qom against the Pahlavi regime.

The live address is also taking place hours after the Islamic Revolution Guards Corps (IRGC) targeted the US airbase of Ain al-Assad in Anbar province in western Iraq after launching a wave of attacks in early hours of Wednesday to retaliate the US assassination of IRGC Quds Force commander, Lt. Gen. Qasem Soleimani.

An informed source at the Islamic Revolution Guards Corps said over 80 American troops were killed and some 200 wounded in the IRGC’s missile strikes.

During the meeting, the Leader of the Islamic Revolution first touched upon the historic significance of the January 9, 1978 uprising in Qom against the Pahlavi regime, and highlighted the need for taking lessons from this landmark event.

“People of Qom had been empty-handed back then, but today, our hands are full and the country is fully equipped against the world’s bullies,” he added.

The Leader then praised the character and role of Gen. Qasem Soleimani in having foiled the US plots in the West Asian region, saying “the US plot for Palestine was to keep them at a weakened state, but martyr Soleimani helped Palestinians to stand strong and resist.”

“The US plots for Iraq, Syria and Lebanon were all foiled by this great martyr. The US wanted for Iraq to be nothing more than dairy cattle, but Hajj Qasem helped this expansive front [against the US].”

“For Lebanon, the US intends to deprive the country of Hezbollah, but Hezbollah has been becoming stronger by the day.”

Talking about Iran’s retaliation for the US assassination of IRGC Quds Force commander Lt. Gen. Soleimani, the Leader said “our revenge was a different matter, which was carried out last night,” referring to IRGC missile strikes on the US airbase of Ain al-Assad in Anbar province in western Iraq.

“What is important in addition to retaliation is that military operations do not suffice. It is important to end the US corrupting presence in the region,” the Leader stressed.