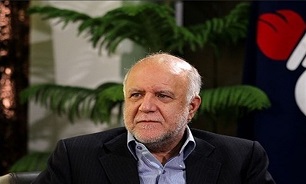 Speaking to the Islamic Republic of Iran Broadcasting on Tuesday night, Zanganeh highlighted the rise in gas extraction from joint fields with neighboring countries and said, “In South Pars, we had a brilliant performance.”

“Our production there increased very much and we were able to reach 670 million cubic meters (mcm) in the current year which is 2.4 times higher compared to 280 mcm in 2013,” he said.

“Fortunately, our daily production of gas has overtaken Qatar’s,” the oil minister went on to say.

Back in September, Zanganeh had said that the country’s gas extraction from the South Pars would reach 750 mcm per day by the end of the current Iranian calendar year (March 2020).

South Pars, whose development has been divided into 28 phases, is located in the Persian Gulf straddling the maritime border between Iran and Qatar.

It is estimated that the Iranian section of the field contains 14 trillion cubic meters of gas and 18 billion barrels of condensates in place.