Military Action on US Bases A Viable Option 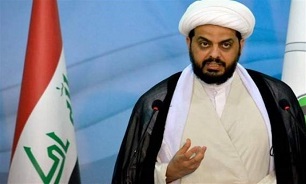 In an interview with Al-Ahed News on Saturday, Sheikh Qais al-Khazali said US President Donald Trump has crossed all red lines by ordering the assassination of top Iranian commander Lt. General Qassem Soleimani and PMU deputy commander Abu Mahdi al-Muhandis, which he slammed as a “serious crime”.

A military response to the US is still an option on the table, Khazali added, noting that an operation by the resistance forces against the American military bases in Iraq has been postponed following the pressures from Iraqi political figures, including head of the Badr Organization Hadi al-Ameri and leader of the Sadrist Movement Muqtada al-Sadr.

“At present, the status of the resistance groups is very strong in the qualitative and quantitative terms, and the number of our forces reaches tens of thousands, and our missile capabilities, along with other equipment, are very great,” Khazali added.

He also noted that the “suspicious” rocket attacks on the US embassy in Baghdad would put the Iraqi government in a dilemma and provide the US with an excuse to remain in Iraq.

“We are currently targeting the US military presence in the military bases. If the US government blocks the assets of Iraq, we will target the American economic interests,” commander of Asa’ib Ahl al-Haq warned.

Reiterating the call for the expulsion of US forces from Iraq, Sheikh Khazali underlined, “We are opposed to the presence of American military advisors in Iraq, and there is no need for the ground or aerial presence of the US on the Iraqi soil.”

In early January, Iraq’s parliament passed a resolution telling the government to end the presence of foreign troops in Iraq and ensure they not use its land, air, and waters for any reason.

The move came after the assassination of IRGC Quds Force Commander Lt. General Soleimani, the deputy head of Hashd al-Shaabi Abu Mahdi al-Muhandis, and a number of others in a US airstrike in Baghdad.

They were killed in the strike by American drones near Baghdad International Airport in the early hours of January 3.