Era of US presence in region over

TEHRAN (defapress) – Top Adviser to the Leader of the Islamic Revolution for International Affairs Ali Akbar Velayati said the era of the Americans’ presence in Iraq and Syria has come to an end and they will be booted from the region soon.
News ID: 80156 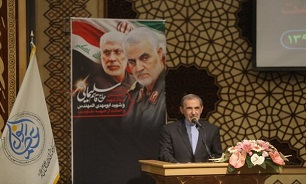 Addressing a ceremony on Saturday on the commemoration of the 40th day of Lieutenant General Soleimani’s martyrdom, Velayati said that thanks to the blood of Martyr Soleimani, “Today, the era of the US presence in Iraq and Syria is over.”

The Leader’s top advisor said the Americans thought in vain that they could overcome the resistance movement by assassinating General Soleimani, adding that the funeral procession of Soleimani and Abu Mahdi al-Mohandes was unparalleled and exposed the Americans' miscalculations.

Referring to attacks on the US forces and their allies in the region, especially in Afghanistan, Yemen and Syria, after General Soleimani's martyrdom, Velayati said that the Iraqi parliament voted for the US exit.

“Afterwards, by the decision of the Afghan combatants, it is time for the Americans to be expelled from Afghanistan,” Velayati added.