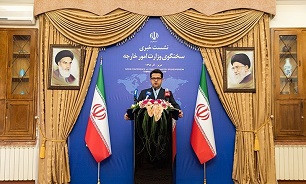 In a post on his Twitter account on Tuesday night, Mousavi confirmed that Zarif had met with Murphy on the sidelines of the Munich Security Conference in Germany and said the talks were in line with Tehran’s public policy.

“Dr. Zarif has always said that he would meet with some members of the US Congress who request him to meet and explain the Islamic Republic of Iran’s views and realities in the region,” he wrote.

“These measures are part of (Tehran’s) public diplomacy, which includes meeting with elites, think tanks and interviewing and meeting with the media,” the spokesman added.

US President Donald Trump suggested that Murphy could have violated a federal law that forbids unauthorized US citizens from negotiating with foreign governments in a dispute with the United States.

This comes against the backdrop of increased tensions between Tehran and Washington after the US forces in Iraq assassinated Iran’s revered commander Lt. Gen. Qassem Soleimani.