TEHRAN (defapress) - Iran’s Foreign Ministry Spokesman Abbas Mousavi decried the Bahraini government’s ruling against Ayandeh Bank (Future Bank) and a number of other Iranian banks, saying the rulings are based on trumped-up charges and lack any legal credibility.
News ID: 80692 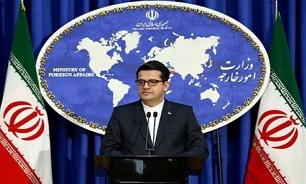 “The rulings have been issued on the basis of a fabricated case, and the bogus accusations against the convicts in the case lack any legal value and bear the Bahraini government’s responsibility for their consequences,” Mousavi said in a statement on Wednesday.

“Needless to say, Iran will not hesitate to defend the interests and rights of its nationals,” he added.

“Future Bank was founded in 2004 at the suggestion and with the permission of the Bahraini government as a joint venture among Iran’s Melli Bank and Saderat Bank as well as Bahrain’s Ahli United Bank, and, from the outset, that country’s (Bahrain’s) Central Bank has been constantly and continually monitoring the banking activities and transactions through its supervisory sections and its representatives in Future Bank’s board of directors,” Mousavi added.

“The Bahraini government’s political and illegal move to confiscate it (Future Bank) and authorize the Central Bank of Bahrain to administer it on April 30, 2015, forced the Iranians shareholders of the bank (Melli Bank and Saderat Bank) to pursue the case through an international tribunal. In such conditions, a legal ruling issued by a judicial system is incomprehensible and could only indicate that the court lacks any legal credibility and is only implementing orders and decisions from the Bahraini government’s political and security organizations,” the spokesman said.

The Foreign Ministry spokesperson further slammed the Bahraini government’s measure as a blatant misuse of the situation where the public opinion has focused on the battle with the coronavirus outbreak and as a sign of collaboration with the US government’s maximum pressures, adding, “Such move by the Bahraini government has been made for the purpose of diverting the attention of public opinion from that country’s (Bahrain’s) illegal measure to confiscate the aforementioned bank (Future Bank) and in an effort to overshadow the process of international judgment on the legal action the Iranian parties of Future Bank have taken against the government of Bahrain and is rejected from the viewpoint of the Islamic Republic of Iran.”