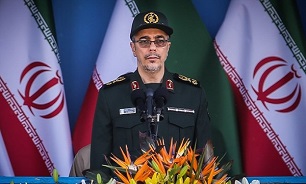 General Baqeri, in a message to Supreme Leader of the Islamic Revolution Ayatollah Seyed Ali Khamenei, the government, the nation and the Armed Forces, said that the IRGC once again proved that it is pioneering in pursuing and materializing Supreme Leader’s commands.

He added that launching Noor-1 satellite is regarded as a blessed dawn for boosting the defense power by joining space and promoting science and deterrence power in line with maintaining self-sufficiency.