TEHRAN (defapress) – The spokesman of the Islamic Revolutionary Guards Corps says the IRGC’s satellite launch once again proved that the US sanctions have not hampered the country’s scientific development.
News ID: 80943 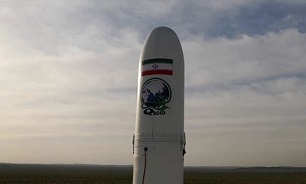 “Following the launch, the Americans and Europeans have confessed that the sanctions have failed to interrupt the Islamic Republic’s scientific development,” Brigadier General Ramezan Sharif said during a state TV interview on Monday.

“They confessed that although the sanctions have affected the Iranians’ lives, they have not hampered the country’s growth in different areas,” he said, stressing that when the country is capable of such measures under sanctions, it is also able to provide its people with their needs despite the economic terrorism posed to them.

He expressed gratitude to the Iranian scientists, authorities, political figures, and the noble nation for their positive reactions to the satellite launch, underlining that the IRGC will continue its efforts on hte path Iran's development and empowerment.

IRGC successfully launched and placed the country’s first military satellite into the orbit on Wednesday (April 22).

The satellite, dubbed Noor-1 (Light), was placed into the orbit 425 kilometers above Earth’s surface.

According to reports, the Noor-1 is Iran’s first multi-purpose satellite with application in the defense industry among other areas. It was launched by Qased, the country’s first three-stage satellite launcher.

On Friday, IRGC Aerospace Division Commander Brigadier General Amir-Ali Hajizadeh said that the country had received signals from Noor-1 satellite and that it plans to launch a future satellite in a higher orbit.

“We received the latest signal last night,” he added, explaining that the satellite orbits the earth every 90 minutes.

“The satellite’s configurations will be fully set in a few days allowing the satellite to attain its full operational capacity,” he added.

He said that the satellite launch has caught the enemies in surprise, following their economic pressures against the Islamic Republic and the nation.

In a tweet on Thursday, Secretary of Iran's Supreme National Security Council (SNSC) Ali Shamkhani also said that “new surprises are on the way” as the country battles US sanctions and pressure alongside the coronavirus outbreak in the country.

“The continuous production of power & use of up-to-date knowledge for security & welfare of Iran people from hospitals to space will continue. New surprises are on the way,” he said.

The US claims that medical equipment and medicines are technically exempt from the sanctions, but their purchases and imports are blocked by bank’s unwillingness to process payment over fears of heavy US penalties.

Iran has now stepped up the production of its own medical equipment, such as ventilators needed for COVID-19 patients.