TEHRAN (defapress)- Iranian President Hassan Rouhani and his Turkmen counterpart Gurbanguly Berdimuhamedow in a phone conversation reviewed avenues to further consolidate relations and cooperation between the two countries in all fields.
News ID: 80966 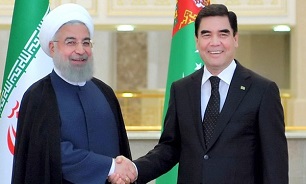 During the phone talks on Wednesday, Rouhani and Berdimuhamedow underlined the historical and cultural commonalities between the two nations and the friendly and growing relations between the two governments in various fields, including trade and economy.

They also stressed the need to develop all-out relations and cooperation to ensure the interest s of both nations.

Rouhani and Berdimuhamedow discussed the problems and difficulties caused by the coronavirus for most countries in the world, stressing the need for efforts of all nations in the fight against COVID-19 while urging mutual cooperation between the two countries towards the goal.

Rouhani said Iran has made good achievements in the fight against the deadly virus and was ready to share its experience with Turkmenistan.

For his part, Berdimuhamedow highlighted Iran’s status in the region’s economic and trade relations, and said the development of relations and sincere cooperation with friendly countries, specially the Islamic Republic of Iran based on mutual respect is a priority for Turkmenistan.

Back in mid-May, Turkmenistan’s Foreign Minister Rasit Meredow told his Iranian counterpart Mohammad Javad Zarif that Ashgabat has the political will to strengthen bilateral relations with Tehran in all areas.

During the meeting in Turkmen capital city, Meredow described Zarif’s visit as very important and timely, adding, “Turkmenistan has a high political will to expand all-out relations with Iran.”

Zarif, for his part, referred to his meeting with Turkmen President Gurbanguly Berdimuhamedow and underlined, “The commonalities shared by the two countries are more than just two neighbors.