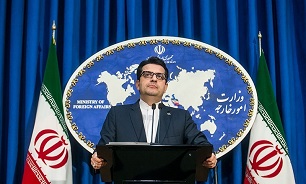 “As earlier stated by various Iranian officials, the Islamic Republic strongly denies the reports that Iranian border guards have forced a number of Afghan citizens to cross Harirud River, causing an incident for them,” Seyed Abbas Mousavi said on Wednesday.

"This was done due to the brotherly ties based on the principles of goodwill and good neighborliness between the two countries,” Mousavi said.

He also stated that Iran considers its borders with Afghanistan as the borders of peace and friendship, highlighting its determination to continue the friendly and brotherly relations with Afghanistan based on mutual respect.

Afghan news media had reported that about 50 Afghan migrants crossing into Iran illegally had been beaten and thrown into a river. Afghanistan's Foreign Ministry on Saturday said an inquiry had been launched.

In Similar remarks on Sunday, the spokesman expressed sympathy with the families of the victims, and said, “This incident has occurred on Afghan soil, and the Islamic Republic of Iran’s Border Police has denied that any happening in relation to this has taken place on the soil of our country.”

According to the latest official figures, 951,142 Afghan refugees reside in Iran. In addition to the refugees, there are around 2.5 million Afghan nationals living in Iran, inclusive of passport holders and undocumented Afghans.