Another Person in Contact with Trump Tests Positive for Coronavirus

TEHRAN (defapress) - A member of the US Navy who serves as one of Donald Trump's personal valets has tested positive for coronavirus, as the White House struggled to clamp down on rumors about the president’s exposure.
News ID: 81038 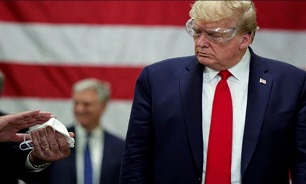 The Trump valet tested positive for the coronavirus on Wednesday after showing symptoms that morning, according to CNN, which reported the news on Thursday.

The White House has confirmed the report, adding that both Trump and Vice President Mike Pence subsequently tested negative for the virus “and they remain in great health.”

CNN claimed the president was “upset” to learn of his valet’s diagnosis, citing an anonymous source, who claimed the news was “hitting the fan” in the White House.

Trump and Pence, as well as the senior staff who regularly interact with them, are being tested weekly with the 15-minute Abbott Labs test, others familiar with the procedure told the outlet, RT reported.

The social media rumor mill immediately began speculating as to who Trump might have “exposed” – never mind the White House’s insistence he was negative for Covid-19.

Trump has crossed paths with infected individuals before, each time sparking a frenzy of speculation from his media nemeses that he might contract the virus. In March, he shared a table with - and was photographed next to - the communications secretary for Brazilian President Jair Bolsonaro. The Brazilian official tested positive just a few days after Bolsonaro's delegation visited Trump at Mar-a-Lago. The following day, Brazilian ambassador to the US Nestor Forster also tested positive for the virus. However, Trump escaped from his Brazilian encounter with negative test results, according to the White House.

A Pence staffer also tested positive for the virus in late March, though the vice president’s press secretary emphasized that neither Trump nor Pence had had “close contact” with that individual. At least one lawmaker - Kentucky Senator Rand Paul (R) - has tested positive for the virus, though Paul claimed not to have any symptoms and has since announced he is fully recovered.

The US Department of Defense has banned all coronavirus survivors from joining the armed forces absent a special waiver, according to a document circulated earlier this week.