TEHRAN (defapress) – An Iranian lawmaker said that the Parliament will address a double urgency motion today on the required actions against hostile measures adopted by the Israeli regime.
News ID: 81084 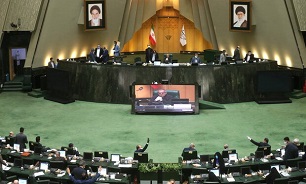 Mohammad Javad Abtahi, a member of Valaei Faction of Iranian Parliament, said that 33 lawmakers have signed the motion so far which deals with hostile measures of the Israeli regime against regional and international peace and security.

He noted that the motion consists of 14 articles. One of the articles, he continued, maintains that the historic land of Palestine belongs to the original Palestinian people.

Also according to the motion, the government of the Islamic Republic of Iran will be obliged to sanction all economic, commercial and financial institutions of the Zionist regime whose shares belongs to Israeli citizens or which are registered in the occupied territories, he added.