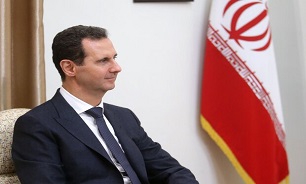 Amir-Abdollahian posted a photo of a meeting between al-Assad and martyred Iranian anti-terror commander, Major General Qassem Soleimani, and wrote, “Dr. Bashar Assad is the legitimate president of Syria and the great leader of fighting Takfiri terrorism in the Arab World.”

He further dismissed the baseless rumors over Iran-Russia consensus for removing the Syrian top leader, terming such claim as “a big lie and American-Zionist media game.”

Rumors circulating in some media claimed that Iran, Russia and Turkey were working to reach a consensus to remove the Syrian president and set up a ceasefire in alternate for forming a transitional authority that features the opposition.

In the meantime, Russia's Ambassador to Tehran Levan Dzhagaryan dismissed such rumors on Saturday and elaborated on the matter in an interview with the Mehr News.