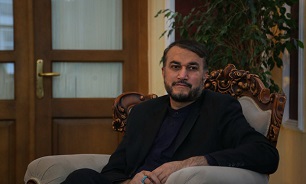 He made the remarks in his meeting with Syrian Ambassador to Iran Adnan Hassan Mahmoud in Tehran on Monday.

In this meeting, Amir-Abdollahian pointed to the age-old and longstanding history of relations between Iran and Syria and added, “Islamic Republic of Iran and Syrian Arab Republic have always enjoyed excellent and strategic ties and Iran’s support for Syria will continue until the complete defeat of terrorism in this Arab country.”

Tehran, Moscow and Damascus will continue their strategic cooperation, he said, adding, “countering the cruel economic sanctions of enemies is of the provisions of serious cooperation between these three countries.”

For his part, Syrian Ambassador to Tehran Adnan Hassan Mahmoud said that relations between the two countries of Iran and Syria are at a strategic level and Syrian government and people are always grateful for the effective support of the Islamic Republic of Iran.