TEHRAN (defapress) - Iran’s Foreign Minister Mohammad Javad Zarif said the Israeli prime minister’s supporters in Washington are complicit in the crimes of the Tel Aviv regime against the people of Palestine.
News ID: 81177 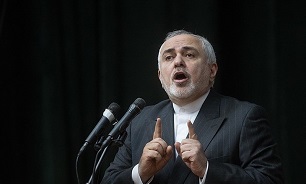 “'Bibi-Firsters'—whether in Foggy Bottom or 1600 Penn—are complicit in all Israeli crimes against humanity. They will have to account for EVERY aggression—from the usurping of Palestinian land & apartheid under the 'Deal of Century' to enabling murder of children with US weapons,” Zarif tweeted on Thursday.

The top Iranian diplomat was referring to US President Donald Trump's so-called deal of the century plan and the Tel Aviv regime’s plan to annex parts of the occupied West Bank.

In another tweet late on Thursday, the Iranian minister downplayed a recent spate of propaganda by Western media about a poster that appeared on the website of Leader of the Islamic Revolution Ayatollah Seyed Ali Khamenei proposing “referendum” as the best way to end Israel's occupation of Palestinian territories and the final solution to the issue of Palestine.

“Disgusting that those whose civilization found a "Final Solution" in gas chambers attack those who seek a real solution at the ballot box, through a REFERENDUM,” he said in the tweet.

In an apparent reference to attempts by the West to make up for the alleged wartime crimes against Jews by trying to prop up and keep the Israeli regime on the map of the world at the expense of Palestinians’ rights, he added, “Why are US and West so afraid of democracy? Palestinians should not have to pay for your crimes, or for your guilt”.