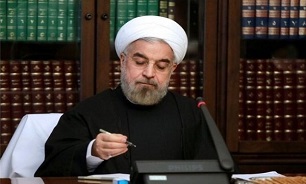 President Rouhani introduced the law on Tuesday to the Ministries of Interior, Intelligence, Foreign Affairs, and Defense as well as the Armed Forces, the Supreme National Security Council, and the Judiciary in order to counter the Zionist regime's hostile actions against peace and security.

According to this law, all executive organs of the country are obliged to take action within the framework of the general policies of the Islamic Republic and use regional and international capacities to counter the hostile actions of the Zionist regime including the crimes against oppressed people of Palestine, the Islamic countries and the Islamic Republic of Iran.

The new law also counters the role of Israel in disrupting the regional and international peace and security and its widespread and systematic violations of human rights, including war crimes, terrorist acts, electronic warfare, the use of heavy and prohibited weapons against civilians, human siege, settlements, displacement of Palestinian people, efforts to annex other parts of Palestine, the occupation of the Palestinian territory and parts of Syria (Golan), Lebanon and other occupied territories.

The law was passed by the Iranian Parliament in a public session on May 18, 2020, and was approved by the Guardian Council on May 20.