TEHRAN (defapress) – In a congratulatory message for new Speaker of the Iranian Parliament Mohammad Baqer Qalibaf, President Hassan Rouhani hoped for close cooperation and constructive interaction between his administration and the new Parliament.
News ID: 81206 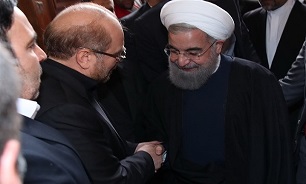 In a message on Thursday, President Rouhani congratulated Qalibaf on election as the new speaker of the Iranian Parliament.

He also expressed hope that “mutual efforts and constructive interaction” between the administration and the Parliament during the new legislature’s term would result in synergy in handling the country’s affairs.

The president also hoped that collaboration between the cabinet and the Parliament would help resolve the problems of people and raise hopes in the society, especially under the difficult conditions caused by the unprecedented sanctions and the outbreak of coronavirus.

Rouhani finally wished Qalibaf success in performing his duties in the Parliament and working towards the goals of the Islamic Republic.

Iranian lawmakers on Thursday elected Qalibaf, a former mayor of Tehran, as the new speaker of the Parliament.