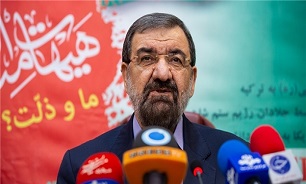 "Mr. Trump! The Minneapolis crisis is bigger than coronavirus," Rezayee, the former commander of the Islamic Revolution Guards Corps (IRGC), wrote on his twitter page on Saturday.

"Shooting is not (like) the repetition of [your] mistake [to prescribe] disinfectant but is like a time bomb for the entire America," he warned Trump.

Meantime, the Iranian Foreign Ministry in a message expressed regret over the murder of black Americans by the government, saying the voice of protesters should be heard in the US.

“The protestors' voice must be heard. In doing so, suppressing the suffering Americans and Press Freedom must urgently be stopped,” it added.

Chaos erupted across the US Friday night as thousands of protesters descended on nearly a dozen cities, pleading for justice in the wake of 46-year-old George Floyd's killing by the US police earlier this week in Minneapolis.

Trump responded to the unrest on Thursday by calling rioters "thugs" and threatening that "when the looting starts, the shooting starts." Almost immediately, Twitter placed a warning on the post, saying it glorified violence.

Ex-police officer Derek Chauvin was fired Tuesday along with the three other officers involved in the incident. Chauvin was taken into custody Friday and faces third-degree murder and manslaughter charges, according to Hennepin County Attorney Mike Freeman.