TEHRAN (defapress)- China warned the United States of retaliation after President Donald Trump announced restrictions on Chinese students in the US in protest over a new national security law in Hong Kong.
News ID: 81226 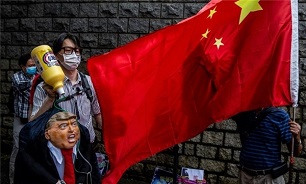 "Any words and actions that harm the interests of China will be met with counter-attacks on the Chinese side," Foreign Ministry Spokesman Zhao Lijian said on Monday, following Trump's move to also strip a number of Hong Kong's special privileges with the US, Asia News reported.

The spokesperson told reporters during that both countries stand to benefit from bilateral cooperation but stressed that Beijing will resolutely defend its security and development interests.

Washington announced last week its decision to revoke Hong Kong's special status under US law, opening the way for the city to be stripped of trading privileges. The US accused China of trampling on the territory's autonomy.

US President Donald Trump has slammed China over the recently-passed national security law by the legislative council in Hong Kong, claiming that Beijing had broken its word regarding the city’s autonomy and vowing that the territory no longer warranted US economic privileges.

Relations between the two world powers have hit the lowest level in decades amid an escalation of the war of words over the Coronavirus pandemic, the Taiwan sovereignty and Hong Kong security law.

Beijing had argued that Washington had "no right to criticise and interfere" in how Beijing regulates its semi-autonomous territory.

China's UN Ambassador Zhang Jun said in a statement after the meeting that the US and UK should "mind their own business," adding, "Any attempt to use Hong Kong to interfere in China's internal matters is doomed to fail."

Hong Kong government officials have also criticized US for moving to strip the semi-autonomous Chinese territory of its special rights status.

Hong Kong was rocked by turbulent protests starting in June last year against a proposed extradition bill. The proposal was later withdrawn but the demonstrations continued and became more violent, endangering the lives and properties of citizens. The protesters have been demanding Hong Kong’s secession since then. They have received encouragement from the United States. The Chinese government says the US and Britain have been fanning the flames of the unrest in Hong Kong by supporting the protesters.