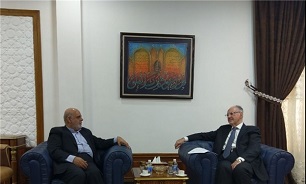 During the meeting with the Iraqi minister, congratulated on the Iraqi minister's appointment to the post and handed over to him and an invitation from Iranian Minister of Economic Affairs and Finance Farhad Dejpasand to pay a visit to Iran.

Allawi, meantime, thanked his Iranian counterpart for the invitation and expressed the hope that he would pay a visit to the Islamic Republic of Iran in the near future at the head of a trade and economic delegation.

Economic relations between Iran and Iraq have expanded and the volume of trade has increased in recent years.

In a relevant development in late May, Masjedi in a meeting with Iraqi Minister of Transportation Nasser Hussein Al-Shibli expressed his country’s readiness to exchange experiences in transportation field with Iraq.

Masjedi expressed hope for promotion of mutual cooperation in the transportation field.

Referring to Iran’s successes in transportation, he said the country is ready to present its experience to its friendly neighbor, Iraq.

He vowed to do his best for enhancement of transportation relations with Iran and to pursue joint projects.