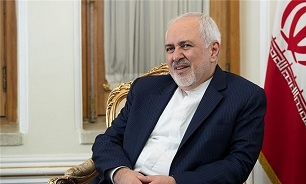 In his congratulatory measure on the occasion of Croatia National Day, the Iranian foreign minister expressed the hope that the two sides would witness further achievements in political and economic, as well as cultural areas.

"I would like to extend my sincere congratulations on the occasion of the National Day of Croatia to the government and the people of Croatia," Zarif said in his message.

In a relevant development on Sunday, Iranian President Hassan Rouhani in a message to his Croatian counterpart Zoran Milanovic called for the further expansion of mutual cooperation between the two countries.

"Besides cultural commonalities, as well as mutual interests of both sides, the Islamic Republic of Iran and Croatia have many opportunities for mutual cooperation," Rouhani said in his message congratulating President Milanovic on the occasion of that country's national day.

"I would like to extend my sincere congratulations on the occasion of the National Day of Croatia to his Excellency, the government and the people of your country," he added.

Rouhani also wished good health and success for the people of Croatia.

In a relevant development in mid-February, Iran's Ambassador to Croatia Parviz Esmaeili and Croatian Foreign Ministry official Emilija Vucinic-Margeta in a meeting in Zagreb underlined the need for broadening relations between the two countries.

During the meeting in the Croatian capital, the two sides reviewed mutual cooperation between Tehran and Zagreb, as well as different issues related to bilateral, regional and international developments.

During the meeting, the new Iranian ambassador submitted a copy of his credentials to Vucinic-Margeta, the Head of Diplomatic Protocol at the Ministry of Foreign and European Affairs of the Republic of Croatia.