TEHRAN (defapress) – New Yorkers stayed on the streets of New York City Thursday for another day of protests spurred by the death of George Floyd, including at a memorial service at the site where police used batons against demonstrators who were out past the city-imposed curfew the night before.
News ID: 81252 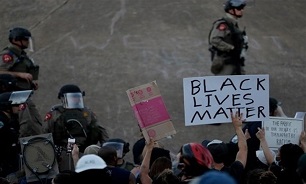 "You are not alone," the large crowd at Brooklyn’s Cadman Plaza chanted before an emotional Terrence Floyd, wearing a mask and a T-shirt bearing his brother’s likeness, thanked them for their support of his brother, killed by Minneapolis police.

"I thank God for you all showing love to my brother," he said, AP reported.

Of the demonstrations that have engulfed the city and the nation, and the violence that has taken place, he said, "I’m proud of the protests but I’m not proud of the destruction. My brother wasn’t about that. The Floyds are a God-fearing family."

The memorial was part of a day of demonstrations around the city that once again continued past the city’s imposed curfew of 8 p.m., even as Gov. Andrew Cuomo and Mayor Bill de Blasio sought to deflect criticism over harsh tactics from police enforcing it.

After curfew time, thousands of protesters were out, and so were police. In some places, they watched but didn't immediately move in, while in others, they made orderly arrests without the batons and riot gear of previous nights.

Miguel Fernandes said there were "a lot more nights to go" of marching because protesters hadn’t got what they wanted.

"We’re still waiting for a conviction. We still haven’t gotten it," Fernandes said. "All they’re doing is putting in charges. The system is not doing anything to make these guys pay for what they did."

As darkness fell, cries of "George Floyd" and "No justice, no peace" continued to come from protesters, even as crowds shrank.

"It's energetic," said Kenyata Taylor. "It's great to be alive, it's history right now.

Demonstrators had been in Cadman Plaza, the site of Floyd's memorial, on Wednesday night, when videos were taken of officers using batons and pepper spray on protesters who remained there after the curfew.

Both Democrats said they had not seen the widely shared videos, but later Cuomo tweeted that he was asking the state attorney general to investigate the incidents as part of her ongoing look into police tactics during the protests.

"Peaceful protest is a sacred American right," Cuomo tweeted. "No peaceful protestor deserves to be hit with a baton and no self-respecting police officer would defend that."

De Blasio spoke at the memorial, with the crowd booing and heckling from the moment he arrived, shouting over him as he urged that Floyd’s death not be in vain.

"We have too much to change in this city and this country," the mayor said.

Even some of the speakers took shots at the mayor, criticizing his management of the NYPD and his administration’s response to the coronavirus.

Earlier, de Blasio said police have used "a lot of restraint" overall and added, "but if there’s anything that needs to be reviewed, it will be."

NYPD Commissioner Dermot Shea defended his officers and the department's overall use of force.

The governor and mayor said protesters should abide by the 8 p.m. curfew put in place earlier this week to deter the violence, vandalism and destruction that followed protests Sunday and Monday nights.

Buffalo also enforced an 8 p.m. curfew Thursday night. Video from WBFO showed a Buffalo police officer appearing to shove a man who walked up to police clearing Niagara Square. The man falls straight backward and hits his head on the pavement, with blood leaking out as officers walk past.

Buffalo Mayor Byron Brown said the unidentified man is 75 years old, and in "stable but serious" condition at a hospital, according to a statement released late Thursday in which the mayor said he was "deeply disturbed" by the video.

Cuomo tweeted that the incident caught on video was "wholly unjustified and utterly disgraceful," endorsing the officers' suspension. The state attorney general's office tweeted that they were aware of the video.