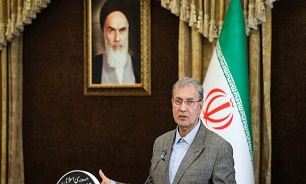 “It seems that arrogant America is trying this time to put its knee on the neck of reliable lawyers of the world, pressuring the breath of justice and common human values,” he said on Saturday, referring to the latest unilateral measure of the United States in imposing sanctions ICC members.

“This sole incident is enough to acknowledge why we don’t consider serious Trump’s readiness for talks,” noted the official.

“Today, America has left no other choice for us than resisting against the bully and calling on all world nations to unite against this unbelievable insurgency,” the spokesman added.

In the latest attempt by the Trump administration to force the Hague-based tribunal out of the investigation into potential war crimes by US military and intelligence officials in the Asian country, Trump issued an executive order on Thursday, saying that the United States would block all American property and assets of anyone in the ICC involved in the probe.

Trump administration officials said the ICC threatens to infringe upon American national sovereignty and accused Russia of manipulating it.