TEHRAN (defapress) – Iranian Ambassador to Iraq Iraj Msjedi stated that the Islamic Republic of Iran's approach is to support and cooperate with the government of Mustafa Al-Kadhimi.
News ID: 81329 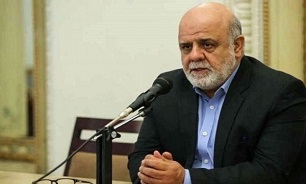 Iraj Masjedi said in a televised interview with Al Iraqiya that Iran supports the government of new Iraqi Prime Minister Mustafa Al-Kadhimi as it is formed based on the will of people and confirmation of Parliament.

Iran is ready to cooperate with Iraq in all fields and expand and strengthen bilateral relations between the two countries, he added.

Iranian ambassador noted that the new Iraqi government's approach to Iran is positive, and Iran is eager to expand cooperation with Iraq as well.

Masjedi expressed hope that economic relations between the two countries, especially in the electricity sector, would be strengthened in the light of the Iranian Minister of Energy's visit to Baghdad and the signing of an agreement in this regard.

Iran supports any domestic production in Iraq and is even willing to invest in this filed, he added.