TEHRAN (defapress) – Iran’s ambassador to the UN nuclear agency warned the IAEA Board of Governors that Iran will take proportionate measures if a US-initiated resolution calling for access to two locations in Iran is passed.
News ID: 81334 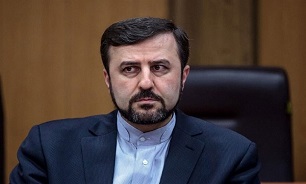 Speaking to reporters in Vienna, Kazem Gharibabadi deplored as a “totally unconstructive measure” the push from three European countries to ratify a resolution in the International Atomic Energy Agency Board of Governors on the agency’s request for access to two Iranian sites.

The countries that either own nuclear weapons or host the stockpiles of such destructive arms are making a mockery of international regulations and norms on nuclear disarmament and nonproliferation regimes by proposing such a resolution on Iran and voicing Safeguards concerns about Tehran’s activities, he added.

Gharibabadi advised the three European countries not to complicate the situation if they are not helping save the Joint Comprehensive Plan of Action (JCPOA).

The envoy further called on the IAEA Board of Governors to exercise caution and prudence and avoid “political and hasty” decisions to protect constructive cooperation between Iran and the IAEA.

“Naturally, if such a resolution, which clearly involves American objectives, is passed, the Islamic Republic of Iran will have to take the necessary measures proportionally, and its responsibility will lie with those who have adopted such political and destructive approaches,” the Iranian ambassador warned.

He also underlined that any request for access to the Iranian sites must comply with the Additional Protocol and be based upon logical and authentic reasons and the independent information and assessment carried out by the IAEA, while the new request is founded on the claims raised by the Zionist regime of Israel, an enemy of Iran.

“This is true that we are working in broad and transparent cooperation with the IAEA, but is does not mean that we would agree to every request from the IAEA on the basis of the bogus claims of our enemies. No other country would do that either,” Gharibabadi stressed.

After opening a virtual meeting of the IAEA Board of Governors on Monday, IAEA Director General Rafael Mariano Grossi said he expects very active discussions on issues related to Iran.

In his introductory statement to the meeting, Grossi said Iran had informed the agency in January that its nuclear program would no longer be “subject to any restrictions in the operational sphere.” Iran made the announcement after the European signatories to the JCPOA failed to take steps to ensure that Tehran would benefit from it following Washington’s unilateral withdrawal from the accord in May 2018.