TEHRAN (defapress) – Iran’s First Vice-President played down the seriousness of a resolution that the IAEA Board of Governors has adopted on Tehran, saying the Islamic Republic does not attach any significance to such resolutions whose purpose is to mount psychological pressure on Iranians.
News ID: 81369 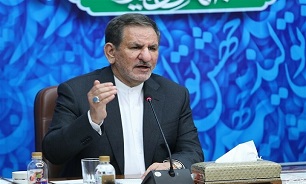 In a meeting with a group of Energy Ministry officials on Saturday, Eshaq Jahangiri said the resolutions passed by the International Atomic Energy Agency do not have any “determining role” for Iran.

“Our country which has withstood the harshest pressures from sanctions in various energy, trade, transportation and banking sectors does not place any value on it (the IAEA resolution), and such resolutions won’t have any serious effect on the country’s situation,” he added.

Denouncing the Western states for initiating the anti-Iran resolution in the IAEA Board of Governors, Jahangiri said Westerners seek to portray an insecure psychological atmosphere against the Iranian nation.

“They want to maintain the psychological burden of sanctions in order to worry the people, investors and producers in the country,” the vice president added.

Iran’s permanent representative to international organizations in Vienna, Kazem Gharibabadi, has already slammed the IAEA Board of Governors for adopting a resolution against Tehran, saying that Tehran will take “appropriate action” in response.

The resolution, submitted by France, Germany, and the United Kingdom, was adopted by a vote of 25 to 2 with 7 abstentions. It comes at a time when the United States is working to extend an arms embargo against Iran.

Iran's Foreign Ministry spokesman Abbas Mousavi on Monday regretted that the IAEA has chosen to ignore Tehran's long history of cooperation, warning that a new resolution "would somehow complicate Iran’s cooperation with the agency”.