TEHRAN (defapress)- A federal judge on Saturday denied a request by the Department of Justice to halt the sale and distribution of a forthcoming memoir by former Donald Trump National Security Advisor John Bolton.
News ID: 81374 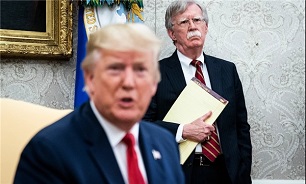 US District Court Judge Royce Lamberth wrote that the government’s request to block distribution of “The Room Where it Happened”, a damning memoir of Bolton’s White House tenure, would be impossible to enforce because thousands of copies of the book have already been printed and shipped to distributors, CNBC reported.

The ruling is a significant blow to the White House, which has taken extraordinary steps in the past week to quash the memoir, set for release on Tuesday and already a bestseller.

In addition to its motion requesting that Lamberth halt sales of the book, which the government filed on Wednesday, the Justice Department has also sued Bolton personally, alleging that he violated nondisclosure agreements he signed with the White House.

“The Room Where it Happened” paints Trump as a “stunningly uninformed”, craven and mendacious chief executive, one who repeatedly signaled his willingness to sell out the nation’s security interests if it meant advancing his own interests.

Saturday’s ruling was far from a total victory for Bolton, however. At several points in his order, Lamberth suggested that Bolton probably did violate his employment contract, and that the government would likely prevail in its lawsuit against Bolton.

“This was Bolton’s bet,” wrote Lamberth, adding, “If he is right and the book does not contain classified information, he keeps the [profits and the publicity for the book]; but if he is wrong, he stands to lose his profits from the book deal, exposes himself to criminal liability, and imperils national security. Bolton was wrong.”

“We respectfully take issue, however, with the Court’s preliminary conclusion at this early stage of the case that Ambassador Bolton did not comply fully with his contractual prepublication obligation to the Government,” Cooper continued, stating, “The case will now proceed to development of the full record on that issue. The full story of these events has yet to be told—but it will be.”

“Wow, I finally agree with failed political consultant Steve Schmidt, who called Wacko John Bolton ‘a despicable man who failed in his duty to protect America’. Also stated that he should never be allowed to serve in government again. So true!” Trump wrote.

“Plain and simple, John Bolton, who was all washed up until I brought him back and gave him a chance, broke the law by releasing Classified Information (in massive amounts). He must pay a very big price for this, as others have before him. This should never to happen again!!!” he added.

The question of whether Bolton’s book contains classified information is at the heart of an ongoing legal battle between Bolton and the White House.

And while Lamberth did not directly rule on this question Saturday, he made little effort to hide the fact that he agrees with the government’s claim that it does, indeed, contain classified material.

Bolton and his attorneys have flatly denied that there is classified information in the book, and they point to a monthslong prepublication review process Bolton underwent with the National Security Council which resulted in several changes to the book at the NSC’s request. Following the edits, the book’s primary reviewer wrote in an email to Bolton in late April that the book did not appear to contain any more classified information.

Yet according to the Justice Department, after this first review process was over, a second, unannounced review of the book was initiated, and this second review turned up more classified information that the first review had missed.

But by the time the White House informed Bolton, in June, that the second review had found more classified information, it was too late. Bolton had already instructed his publisher to print the book and distribute it around the world.

In his ruling Saturday, Lamberth repeatedly faulted Bolton for not waiting until he had final, written authorization from the government before telling his publisher to proceed with printing the book.

The judge also said that after personally reviewing the material in Bolton’s book that the government claims is classified, Lamberth agreed with the Justice Department: Bolton’s memoir discloses classified information.

For the purposes of Saturday’s order, however, Lamberth set aside this question of whether there is classified information in the book.

Instead he zeroed in on the issue of whether a last-minute court order blocking the book was an appropriate remedy to prevent this information from becoming public.

And one of the things the government had to prove in order to convince him to issue such an order, Lamberth wrote, was that it would actually work.

With the book already in thousands of bookstores, distributed to reviewers and journalists and purchased by thousands of people online, a court order blocking it would not succeed in keeping the classified material under wraps, wrote the judge.

Below is a photo of “The Room Where it Happened”, taken at the White House earlier this week. Many journalists there received advance copies of the memoir from the publisher.

“While Bolton’s unilateral conduct raises grave national security concerns, the government has not established that an injunction is an appropriate remedy,” Lamberth wrote.

“Defendant Bolton has gambled with the national security of the United States. He has exposed his country to harm and himself to civil (and potentially criminal) liability. But these facts do not control the motion before the Court. The government has failed to establish that an injunction will prevent irreparable harm. Its motion is accordingly denied,” Lamberth stated.

Given that the book is slated for release on Tuesday, it is unlikely the government will appeal this ruling.

Bolton’s publisher, Simon & Schuster announced in a statement, “We are grateful that the Court has vindicated the strong First Amendment protections against censorship and prior restraint of publication. We are very pleased that the public will now have the opportunity to read Ambassador Bolton’s account of his time as National Security Advisor.”

Seeking to spin his loss into a victory, Trump seized on Lamberth’s skeptical comments about Bolton’s contract, declaring that the decision was a “BIG COURT WIN against Bolton”.

“Obviously, with the book already given out and leaked to many people and the media, nothing the highly respected Judge could have done about stopping it,” Trump tweeted shortly after his first tweets attacking Bolton.

“BUT, strong & powerful statements & rulings on MONEY & on BREAKING CLASSIFICATION were made...Bolton broke the law and has been called out and rebuked for so doing, with a really big price to pay. He likes dropping bombs on people, and killing them. Now he will have bombs dropped on him!” he added.