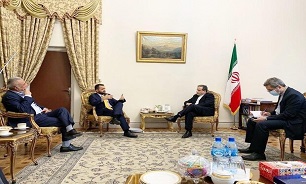 During the meeting, the two sides conferred on a host of issues of mutual interest and explored ways of broadening bilateral ties between the two neighbors.

In a Twitter post on Sunday night, Naab wrote, “I held constructive talks with Araghchi about the comprehensive cooperation agreement between Iran and Afghanistan in the economic, transit, political and border fields.”

He stressed that tackling the Afghan immigrants’ challenges and legalizing their presence in the country are on top of Kabul’s agenda.

The official also expressed gratitude to the Islamic Republic for its supports in the Afghan peace process.