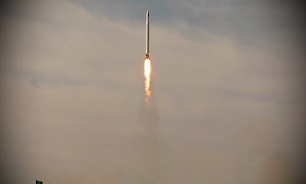 “Our progress in the front of independence and security is exemplary,” he said while addressing a local ceremony held to commemorate Marty Chamran on Sunday.

“Our military satellite transmits detailed photos from over US and Israeli regime’s sky and our precision missiles have created panic among Americans,” he said.

The remarks come as IRGC placed Iran’s first military satellite, Noor-1, into its designated orbit on April 22, using a home-made three-stage launcher, Qassed-1. While little data has been made available about the Noor-1 and its features, its classification as a multi-purpose satellite with special uses in the defense sector suggests that the IRGC has reached such technological maturity that it can now confidently plan and carry out intelligence warfare and military reconnaissance missions from space while gathering data that helps keep the Iranian skies safe.

Iran has also taken effective steps in boosting its missile technology over the years. The last missile unveiling came on Thursday when the Iranian Navy successfully test-fired a new generation of sea-to-sea and coast-to-sea cruise missiles.

Tehran has highlighted that its defensive prowess is only a tool to deter attacks and defend the nation in case of any confrontation while noting that it will not use this power to wage war against other countries.