TEHRAN (defapress) – Taha Al-Mutawakkil, Yemeni Minister of Public Health and Population, said that Saudi-led coalition has targeted the health sector in Yemen in a systematic manner during the five years of aggression.
News ID: 81379 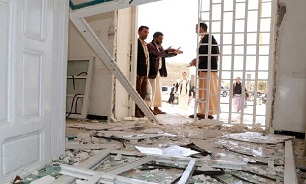 Al-Mutawakkil made his remarks during his presidency with the governor of Hajjah Hilal Al-Soufi the extended meeting of health cadres in the governorate on Sunday, affirming that the aggression targeted more than 300 hospitals and health facilities, according to Almasirah.

“Hundreds of ambulances were not safe from the aggression’s targeting in compounded crimes, where the paramedic and the victim were killed,” he said, indicating that the Saudi-led aggression also targeted the health sector by emptying the country of qualified medical personnel and attracting them abroad.

He noted that during the past weeks with the spread of the coronavirus, the coalition of aggression was aimed at striking public confidence in doctors and the Ministry of Health by spreading rumors and false news.

“The aggression’s targeting of the medical sector is a deliberate targeting by using the media machine,” he said. “Citizens should be concerned with awareness and trust in the doctor.”

Al-Mutawakkil pointed out that the health situation is very poor and painful in the occupied areas and the citizens there, including those returning from abroad, lack real health care.

Regarding the medical bridge, which the United Nations promised to run to treat patients, the Minister of Health affirmed that the international medical bridge is a major lie, as only 50 patients were transported and then it stopped. “We have thousands of difficult medical cases in urgent need of treatment abroad.”

The Minister of Health indicated that Hajjah governorate has suffered from deprivation during the past decades, as it has only 8 rural hospitals serving 31 districts.