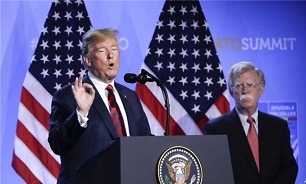 “I hope it will remember him as a one-term president who didn't plunge the country irretrievably into a downward spiral we can't recall from,” Bolton said in an interview with ABC’s Martha Raddatz aired Sunday night , when asked how he thinks history will remember Trump.

“We can get over one term. I have absolute confidence — even if it's not the miracle of a conservative Republican being elected in November. Two terms, I'm more troubled about,” he added.

Bolton noted that he didn’t believe Trump “fully understands the democratic process” or the Constitution and doesn’t appreciate the “proper role of the presidency”. He also criticized Trump's style of governance, warning that under the current president there's "no coherent basis, no strategy, no philosophy".

"And decisions are made in a very scatter shot fashion, especially in the potentially mortal field of national security policy," Bolton added, saying that "this is a danger for the republic".

Bolton was critical of both Trump and his Democratic opponent, former Vice President Joe Biden, and said he would write in the name of a conservative Republican when he votes in the November general election.

“I'm really troubled about the absence as well of a viable national security wing in the Democratic Party. So this is an election for me of a choice of two unacceptable alternatives. And it's not one I relish,” Bolton continued.

Bolton sat for the interview to promote “The Room Where it Happened”, his forthcoming memoir that paints a scathing picture of the Trump White House.

In the book and his interview with ABC News, Bolton describes Trump as easily moved by foreign leaders including North Korean Leader Kim Jong-un and Russian President Vladimir Putin. He describes Trump as mesmerized by so-called “love letters” that Kim sent him and obsessed with the photo opportunity of the first meeting between the two in Singapore. Bolton also asserts that Putin believed he could play Trump “like a fiddle”.

Trump has sharply criticized Bolton, who served as his national security adviser for 17 months before stepping down last September, over the book, calling him “incompetent” and claiming Bolton’s book was “made up of lies”.

The Justice Department sued to stop the publication of Bolton’s book, claiming it contained classified information. A federal judge denied that attempt over the weekend, noting the book – which will be released on June 23 – had already been widely distributed.

But the judge questioned Bolton’s decision to push forward with the book’s publication before receiving written notice that the book didn’t contain classified information and left open the possibility the government could seize proceeds from the book.