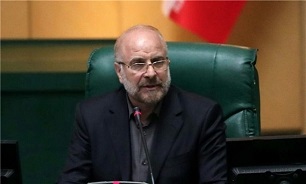 Qalibaf made the remarks in a meeting with Syrian envoy to Tehran, Adnan Hassan Mahmoud, on Monday.

The reason behind imposition of economic sanctions against Syrian people (under the so-called Caesar Act) is that the enemies have failed in the military and security war, he said.

History bears witness to the deep and unbreakable bond between Iran and Syria which originates in the beliefs of the two nations, the speaker noted.

“Iran has always considered Syria to be in the frontline of the Resistance Front, Qalibaf said, adding, “This began with the glorious triumph of the Islamic Revolution and has come from strength to strength through the course of time.”

“Today, we are witnessing that enemies of Syria, Iran and Islamic Ummah are disappointed,” Iran’s speaker underlined.

He glorified the name and memory of martyr Gen. Soleimani, saying, “Martyr Soleimani donated his pure blood to preserve the Axis of Resistance and we will continue his path steadfastly.”

Iran has repeatedly stressed that Ein Al-Assad missile attack was just the start of its revenge for the US assassination of its top General, and not the end of it. Tehran has declared expulsion of the US troops from the region as its ultimate goal.