TEHRAN (defapress) – Al-Nujaba combatants in an operation carried out in the north of Baghdad managed to arrest a number of elements who were accused of terrorist acts.
News ID: 81447 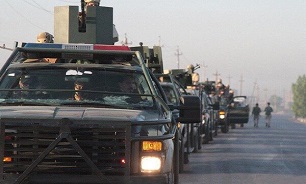 The massive security operation was started with the participation of the brigade no. 12 of the IPMF including al-Nujaba Islamic Resistance combatants on Thursday 7.2.2020 in al-Taremia region in the north of Baghdad, reported al-Nujaba’s Centre for Communications and Media Affairs in Iran.

A target of this operation was chasing those being prosecuted and the inactive cores of the ISIS, and during the said operation, the combatants managed to arrest a group of the people being prosecuted by the Iraqi judicial system and accused of participation in terrorist acts.

This operation will be continued so that all the determined houses are checked one by one and cleansed of tunnels, hideouts and dirt of the terrorist elements.