TEHRAN (defapress) – The Zionist Regime’s fighter jets have flown over southern Lebanon on Sunday, according to the sources.
News ID: 81648 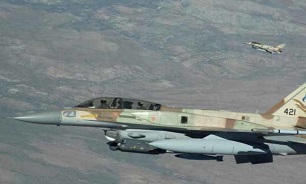 The Zionist Regime has launched an attack on the southern part of Lebanon using smoke bombs on Sunday, Elnashra reported.

The report also added that the Zionist regime's fighter jets have repeatedly violated Lebanon’s airspace at the same time.

Meanwhile, tension has escalated on the borders of Lebanon and occupied Palestine.

The Lebanese army announced on Saturday that the Zionist Regime had violated Lebanese airspace 29 times in the past two days.

According to Almayadeen, Tel Aviv is currently very confused and frightened due to the possibility of Hezbollah’s response after the martyrdom of one of its soldiers by the Zionist Regime.

Hezbollah's imminent reaction has caused the Zionist regime's officials to keep their army on alert.