TEHRAN (defapress) – The Islamic Revolution Guards Corps (IRGC) on Tuesday launched the final stage of a large-scale military exercise in southern Iran, including in the Persian Gulf and the Strait of Hormuz.
News ID: 81658 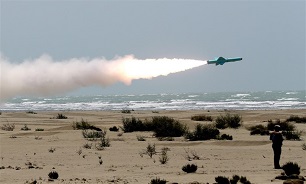 The IRGC Public Relations said the final stage of the war game, codenamed “Payambar-e Azam 14 (The Great Prophet)”, started on Tuesday morning in the southern province of Hormozgan, western parts of the Strait of Hormuz, and the Persian Gulf.

The joint exercise, including forces from the IRGC Navy and the IRGC Aerospace Force, involves ground, aerial, naval and space operations.

The final stage of the drills includes joint operations by missile units, vessels and drones from the IRGC Navy and missile, drone and radar units from the IRGC Aerospace Force.

Satellite images taken by Iran’s homegrown ‘Noor’ (light) satellite that was launched into space in April have been used to evaluate the situation in the war game zone.

The IRGC successfully put Noor into orbit on April 22. The Iranian satellite was launched with the three-stage satellite carrier Qassed (messenger) from a launch pad in Dasht-e Kavir, a large desert in central Iran.

Back in February 2018, Leader of the Islamic Revolution Ayatollah Seyed Ali Khamenei called for efforts to maintain and boost Iran’s defense capabilities.