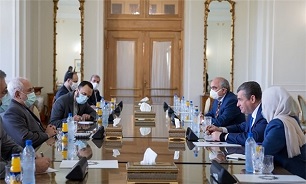 Zarif made the remarks in a meeting with Chairman of the Russian Duma’s Committee on International Affairs Leonid Slutsky in Tehran on Sunday.

Iran and Russia prepared a treaty in March 2001 as a roadmap for 10 years of bilateral relations and principles of cooperation between the two countries. The treaty is extended every five years automatically if not faced with opposition of either side.

He also described parliamentary relations between the two countries and the two legislatures’ emphasis on strengthening bilateral strategic ties as important.

During the meeting, the two sides also discussed different aspects of mutual economic cooperation, the two countries’ views on issues related to the 2015 nuclear deal, developments in Syria, Iraq, Yemen and Libya as well as Iran-Russia cooperation in regional and international mechanisms and relevant bodies.

In a relevant development on Saturday, Iranian Speaker Mohammad Baqer Qalibaf in a meetng with Slutsky said the parliament is prepared to promote parliamentary relations with Russia, noting that both nations need to focus on all-out relations in various fields.

He voiced Iranian parliament’s readiness to accelerate joint cooperation with Russia in different fields including politics, trade, economy and culture.

Referring to the meeting between Russian President Vladimir Putin and Supreme Leader of the Islamic Revolution Ayatollah Seyed Ali Khamenei as a turning point, he emphasized developing all-out cooperation between the two countries.

Slutsky, for his part, said that by maintaining cooperation among Iranian and Russian expert parliamentary committees, "we can hold joint meeting on political, energy and economic fields".