TEHRAN (defapress) – Lebanese authorities said at least 78 people have been killed and some 4,000 wounded in a massive explosion at the port in the capital, Beirut.
News ID: 81728 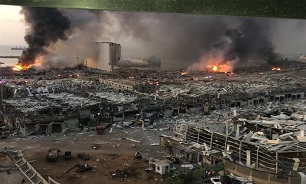 The explosion on Tuesday sent shockwaves across the city, causing widespread damage even on the outskirts of the capital.

The cause of the explosion was not immediately clear. Officials linked the explosion to some 2,700 tons of confiscated ammonium nitrate that were being stored in a warehouse at the port for six years.

The head of Lebanon's General Security, General Abbas Ibrahim, visited the site of the explosion and said it appears the explosion was caused by highly explosive material that was stored in a warehouse.

Aoun said that it was "unacceptable" that 2,750 tons of ammonium nitrate were stored in a warehouse for six years without safety measures, according to statements published on the presidency's Twitter account.

He also pledged that those responsible would face the "harshest punishments" and said a two-week state of emergency should be declared.

After the council meeting at the Baabda presidential palace, which was also attended by Prime Minister Hassan Diab, the following was announced: - An investigation committee has been tasked to say who was responsible for the blast within five days. The families of victims will be paid compensation. Import traffic will be routed to the Tripoli port in northern Lebanon.

Diab has called for a day of mourning on Wednesday.

Officials said they expected the death toll to rise further after the blast as emergency workers dug through rubble to rescue people and remove the dead.

The United Nations Interim Force in Lebanon (UNIFIL) said one of its ships docked at the port was damaged in the explosion, leaving a number of its personnel wounded, including some in critical condition.

UNIFIL said it was transporting the wounded peacekeepers to the nearest hospitals and was assessing the situation, including the scale of the impact on its personnel.

At least 60 of the wounded people were in critical condition, according to the Red Cross.

The organization said it had also set up triage and first aid stations to help people with non-critical injuries.