TEHRAN (defapress) – Commander of the Islamic Revolution Guards Corps Major General Hossein Salami assured the Lebanese people that they won’t be left unaided in tough times, saying the IRGC has mobilized all efforts to assist them after the huge blast in Beirut.
News ID: 81742 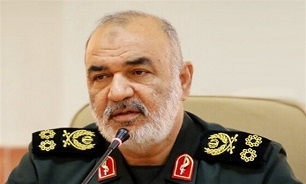 Speaking to reporters on Thursday, Major General Salami underlined that the IRGC will not abandon the Lebanese nation in the difficult conditions and will stand by them forever.

“We declare that all of our capacities have been mobilized to offer relief and assistance to the Lebanese nation,” he stated.

Praising the Lebanese people as the bright stars of resistance in the Muslim world who have withstood the calamities with fortitude, the IRGC chief said Iran tries to provide humanitarian aid to help Lebanon deal with the disaster caused by the July 4 blast.

Officials linked the blast to hundreds of tons of confiscated ammonium nitrate that were being stored in a warehouse at the port for six years.

The explosion has also destroyed Lebanon’s silos that contain the national grain reserve. Lebanon imports up to 80 percent of its food needs and is particularly reliant on imported soft wheat to make Arabic flatbread. About 85 per cent of the country's cereals were reportedly stored in the facility.