US recourse to JCPOA provisions has no legal basis

TEHRAN (defapress) – Iranian President's Chief of Staff Mahmoud Vaezi said that US efforts to return UN sanctions against Iran are doomed to failure as their claims have no legal basis.
News ID: 81825 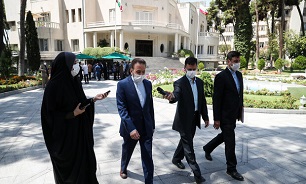 After the UN Security Council rejected the US resolution on extending arms embargo against Iran last week, American officials said that they will pursue to use JCPOA provisions to trigger a mechanism that could potentially return UN sanctions against Iran. Tehran, along with other signatories of the deal, highlight that Washington has no right to do so because it has unilaterally ‘ceased participation’ in the JCPOA in May 2018.

“The US recourse has no legal basis,” Vaezi told reported on the sidelines of a cabinet meeting on Wednesday. “China, Russia, and European countries also oppose the US measure.”

“It seems that the measure is infeasible and it will bring another failure for the US,” he added.

“That mechanism is solely for members of the JCPOA and Americans have officially withdrawn from the agreement and not fulfilled their commitments; so they cannot use that mechanism,” he added.

“Under current conditions that Trump has a weaker position than his rival in the polls, they are after launching propaganda campaigns such as the brokered agreement between Israeli regime and UAE,” said the official.

“It does not matter to us who comes to power in the United States, Iran has its own principled policy,” Vaezi noted.