TEHRAN (defapress)- A group on Saturday kicked off 60 days of planned protests leading up to the 2020 presidential election.
News ID: 81955 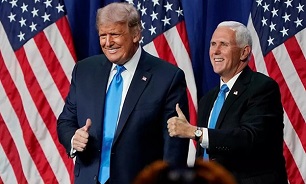 They changed, “Trump, Pence out now!” and carried signs and at least in one case, an effigy of President Donald Trump.

The group plans to hold protests every day in what they say is an effort to drive the Trump administration from the White House.