Trump says no transition if Dems cheat in election

TEHRAN (defapress) – US President Donald Trump says he will win the election unless Democrats cheat, and in that case, there will be no transition of power.
News ID: 82110 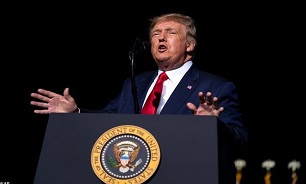 Donald Trump insisted Friday that the only way he will lose the presidential election in November is if Democrats cheat through mass mail-in ballot measures implemented in light of in-person voting concerns due to the coronavirus pandemic.

“That's the only way we're going to lose, is if there's mischief,” Trump told a crowd of ultra-loyalists at a rally in Newport News, Virginia, Dailymail reported.. “And it'll have to be on a big scale. So be careful.”

“And we do want a very friendly transition,” he assured. “But we don't want to be cheated and be stupid and say 'Oh let's transition. Well we'll go and we'll do a transition and we'll know that there were thousands and thousands of ballots that made a difference through cheating. We're not going to stand for it.”

Trump has often railed against mail-in voting, as several states have taken measures to send out ballots to all registered voters in the midst of the global health crisis. He claims the alternative voting option will cause more instances of fraud and will disproportionately benefit Democrats.

“This is a disaster waiting to happen,” Trump said of mail-in voting. “And the only hope we have really, other than going through a long, unbelievable litigation in the end after it's over. Because we're going to win. We're not going to lose this, unless they cheat – that's the way I look at it.”

The president made the comment as some of his fiercest critics have said he is moving toward authoritarianism. Biden said this summer trump will 'try to steal' but said he is convinced the military 'will escort him from the White House with great dispatch.'

Earlier in the day, reports emerged that the president will nominate Federal Judge Amy Coney Barrett to replace Ginsburg, who lied in repose at the Supreme Court and Capitol this week.

Ginsburg died at 87-years-old due to complications from pancreatic cancer.Trump has promoted filling the seat before the election, further suggesting he will question the outcome in November and is expecting a potential Supreme Court battle over the ultimate victor.

By getting his nominee through – a seemingly simple task with a Republican Senate majority – Trump wants to further ensure a conservative majority on the highest U.S. court, as well.