US Should Leave Syria 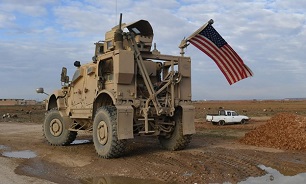 During the phone talks on Wednesday, both sides conferred on recent developments in Syria, including the meeting of the Constitutional Committee, the Astana Peace Process, the situation in Idlib and East of the Euphrates, as well as the humanitarian situation in the country.

Khaji, for his part, referred to the position of the Islamic Republic of Iran on the political settlement of the Syrian crisis, and urged foreign countries not to interfere in the process of Syrian-Syrian dialogue which is within the framework of the Constitutional Committee.

He condemned the illegal presence of the US in Syria and its efforts to plunder the country’s oil reserves as well as supporting terrorist groups and stressed the need for the US withdrawal from the Syrian territory.

Khaji also welcomed the expansion of relations between the Islamic Republic of Iran and Japan in the region and called for the continuation of Japanese humanitarian aid to Syria.

During the talks, Endo emphasized the significance of Iran’s role in resolving the Syrian crisis, and praised the efforts of the guarantors of the Astana Peace Process.

In relevant remarks on Tuesday, Commander of the Islamic Revolution Guards Corps (IRGC) Major General Hossein Salami said that the US has now been isolated in the world and is withdrawing from the region.

“Today the US, which has been exerting pressures to isolate Iran, has itself been isolated. The US has gradually lost its political influence in the region and the world and has been marginalized in the political developments and failed to score any victory in the battlefield,” General Salami said, addressing Iranian lawmakers in Tehran.

He referred to the US role in the formation of ISIL terrorist group, and said Iran defused Washington’s plots in this grand battlefield and prevented materialization of its political wishes to restructure the Middle-East politically.

“The US is now withdrawing while it is tired, worn-out and debilitated,” General Salami said.