Trump' insults will unite Iranians against US bullying

TEHRAN (defapress) –Calling Trump’s insults as a sign of anger over the ineffectiveness of US foreign policy, the Chairman of Iran’s Strategic Council on Foreign Relations said, "Such moves will make Iranians more united in resisting US bullying."
News ID: 82256 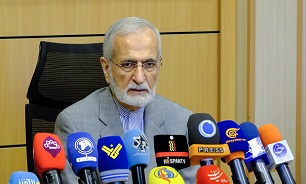 Kamal Kharrazi made the remarks in reaction to the recent anti-Iran insults of the US President, adding, “Trump's insulting words are a sign of his anger and dissatisfaction with the ineffectiveness of sanctions and the failure to achieve US goals against Iran.”

Not only such ill-mannered behavior will never help the US to achieve its goals, but also, it will make the Iranian nation more united in the path of resisting US bullying and unilateralism, he said.

Elsewhere in his remarks, he condemned the US Treasury Department move of imposing fresh sanctions on Iran’s financial sector, targeting 18 banks in an effort to further choke off Iranian revenues.

The US has intended to bring Iran to its knees through imposing new sanctions and redoubled pressure, he said added, “The main US policy towards Iran is the maximum pressure that the result of which was US withdrawal from the JCPOA, re-imposition of anti-Iran sanctions and assassination of Lenient General Soleimani.”

“Further, the White House purpose of pursuing a policy of maximum pressure, withdrawing from JCPOA, as well as doing various conspiracies was to collapse the establishment of the Islamic Republic Iran,” he underlined.

However, fortunately, with the resistance of the Iranian nation, the White House did not achieve its sinister goal, he asserted.

He also referred to the upcoming US presidential election, stressing, “Regarding the fact that the US administration has some problems in terms of the foreign policy, therefore, Trump is resorting to such anti-Iran issues to win the election.”