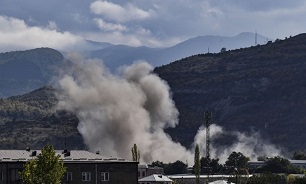 "Turkey <...> does not give up its stance of further destabilizing the situation and undermining the agreements reached," Armenian Foreign Ministry Press Secretary Anna Naghdalyan wrote on her Facebook page on Sunday, TASS reported.

"Turkey has also been sponsoring Azerbaijan’s information and political campaign aimed at undermining the provisions of the agreement on the cessation of hostilities reached at the level of the Foreign Ministers of the Republic of Armenia, the Republic of Azerbaijan and the Russia Federation on October 10, 2020, at the initiative of the President of the Russian Federation Vladimir Putin," she added.

At the talks, mediated by Russia and held in Moscow on October 9, Azerbaijan and Armenia had agreed on a ceasefire. It came into effect at 12:00 local time on Saturday, October 10, for humanitarian reasons, in order to trade detainees and recover the bodies of those killed in fighting.

Renewed clashes between Azerbaijan and Armenia erupted on September 27, with intense battles raging in the disputed region of Nagorno-Karabakh. The area experienced flare-ups of violence in the summer of 2014, in April 2016 and this past July. Azerbaijan and Armenia have imposed martial law and launched mobilization efforts. Both parties to the conflict have reported casualties, among them civilians.

The conflict over Nagorno-Karabakh, a disputed territory that had been part of Azerbaijan before the Soviet Union break-up, but primarily populated by ethnic Armenians, broke out in February 1988 after the Nagorno-Karabakh Autonomous Region announced its withdrawal from the Azerbaijan Soviet Socialist Republic. In 1992-1994, tensions boiled over and exploded into large-scale military action for control over the enclave and seven adjacent territories after Azerbaijan lost control of them. Talks on the Nagorno-Karabakh settlement have been ongoing since 1992 under the OSCE Minsk Group, led by its three co-chairs - Russia, France and the United States.