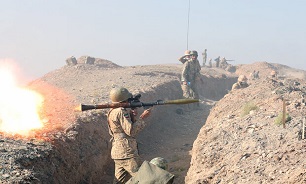 The military exercise, codenamed ‘Lovers of Velayat-99’, was held to display the country’s defensive might and the readiness of the armed forces to counter any threat against the Islamic Republic’s security and integrity.

In this specialized tactical exercise, the first phase of which was held overnight, the infantry, engineering, UAV and artillery units supported the 164th Mobile Assault Brigade in achieving predetermined goals during the drill.

Maintaining and promoting mobility, responding quickly to threats, and increasing combat readiness and defense capabilities were among the objectives of the Lovers of Velayat-99.

With over four decades of arms embargo imposed against the country by the west, Iran has had no way but to stand on its own feet to build up its military arsenal. Today, Iran says over 80 percent of its defense equipment are indigenous.

Iran's army says with its domestic air defense equipment, Iran's skies are safer than ever. However, army commanders here say Iran will never initiate a war against any country and its military might serves only defensive purposes.